It was, Laurie Loew says, one of the bravest moves she has ever made: Starting her own Austin-based real estate company on July 23, 2008.

Loew’s marriage had dissolved the year before, and she wasn’t sure she’d be able to keep working in real estate. But she decided to move forward with her plan to use a “socially responsible” strategy that she hoped would differentiate her firm — which she named Give Realty Inc. — from the competition.

The concept was that Give Realty would be a “philanthropic brokerage” that would donate 25 percent of every sale or commission to a local or national nonprofit of each client’s choice. Having grown up in a Catholic family with nine siblings in an 1,800-square-foot home in Scottsdale, Ariz., Loew says the strategy also aligned with her upbringing — particularly her mom’s mantra to her to always “count your blessings.”

Five years later, Give Realty has surpassed the quarter-million mark in charitable giving, with donations to date totaling $259,527 to nearly 80 nonprofits, Loew said. They include Manto Coahuila Orphanage, the Austin Community Foundation, Safeplace, Any Baby Can, CASA and Austin Pets Alive.

Loew said her firm generated $1 million in revenue in the past five years, including more than $300,000 in the 12 months that ended in June. Assuming the current sales pace continues, Loew expects to top the $500,000 donation mark within two years.

Debbie Johnson, director of Austin Gives, a nonprofit organization that recognizes businesses that give back 1 percent or more of their pre-tax earnings, said Give Realty “epitomizes great philanthropy in Austin.”

Loew “not only gives back way more than most businesses, but she is also committed to creating other, new philanthropists so there is a magnified effect to her giving,” Johnson said by e-mail.

Nationwide, corporate giving is typically just over .1 percent of revenue and just under 1 percent of pre-tax earnings, Johnson said.

Susan Raymond, executive vice president of New York-based Changing Our World, a global consulting firm to nonprofit organizations, corporations, private foundations and philanthropists, said a “fundamental change” is taking place in the way communities and companies look at their relationship to one another.

In an e-mail, Raymond said companies like Give Realty “represent a growing trend in which the success of business creates resources to strengthen community. This has always been the case in many ways – successful business creates jobs and economic value which strengthens community. But to that benefit is now added a more purposeful resource transfer, that adds to the inherent relationship a conscious contribution to the nonprofit institutions that serve the larger societal need.

The changing model, Raymond said, is a “win-win; business gains, economies gain, and the larger community is strengthened by the shared attention to societal needs.” 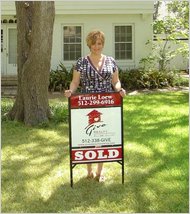 From the outset, Loew said the “socially responsible” business model she adopted was life-changing.

Loew said when she made Give Realty’s first donation — $1,050 to Mobile Loaves and Fishes on July 31, 2008 — the nonprofit’s receptionist didn’t quite know what to make of it when Loew dropped off the check.

“I literally cried on my way home, I was so happy,” Loew said. “It felt really good.”

Her next client worked at Dell Inc., resulting in a $1,600 check to the Downs Syndrome Association of Central Texas. Dell Inc. matched the contribution, for a total gift of $3,200.

Loew said that even as she watched her retirement savings dwindle during the firm’s first two years as she struggled along with the economy, she refused to change her business model, continuing to donate the full 25 percent.

“It was an investment in my future, and in Austin’s future,” said Loew, whose firm has two full-time agents, one part-time agent and an administrative assistant.

Loew said if every local real estate agent had given one-fourth of their commissions to nonprofits, it would have resulted in more than $14 million being donated in May alone.

“It’s the tip of the iceberg of what can be done,” she said.

Paul Hilgers, president of the Austin Board of Realtos, said Loew “should be recognized for the creative business model that she has, and we are interested in exploring other opportunities for Austin Realtors to make a difference in their community like she has.”

He said it will be a topic of discussion for the board and its foundation going forward, including in upcoming strategic planning sessions.

That’d be just fine by Loew, who said her business model is not about her becoming wealthy, but about “doing some good in the world.” And it has altered her definition of success along the way.

“I have never been happier,” Loew said. “I literally get goosebumps every day. You can create change.”